Unsurprisingly, the holidays have put a bit of a dent in any creative endeavors. I did start on another pic from the Ximon photoshoot, but not enough to show yet.

As stated before, I've succumbed to the call of Instagram. I'm finding that sometimes I'm using that instead of digging out my point and shoot camera, and I'm not sure if that's good or bad yet, but I think it's more for the instant filters and quick uploading more than anything else. I won't be doing photoshoots with just a cellphone anytime soon.

I did find enough on Xmas eve to catch my eye a few times: 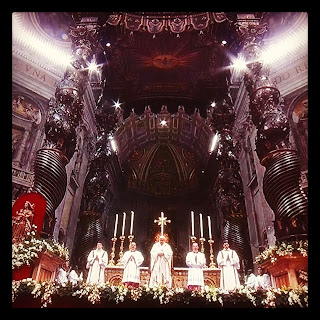 The Vatican Xmas eve mass came on late at night when I was in my hotel room, and I was mesmerized by the architecture. 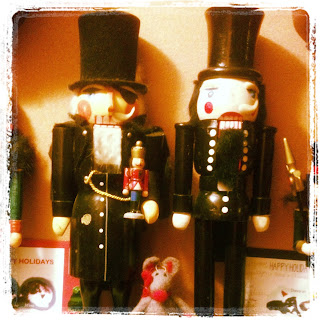 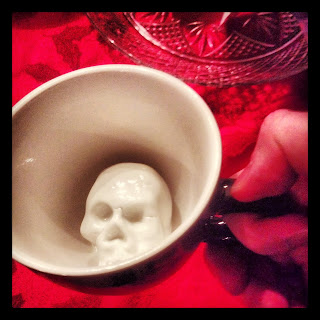 It's become a tradition somehow for my aunt or cousins to get a gift for me that is skull-themed. Here's this year's present. 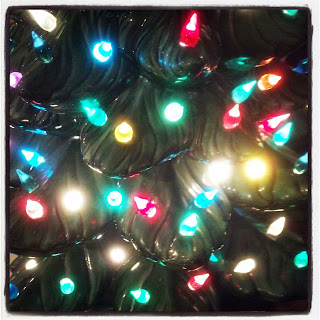 Mostly a week of more introspection, as I perused the box full of sketchbooks some more. I'm fascinated both by some of the forgotten ideas in them that I think could still work and could probably pull off better than I could back then, and also the often cryptic writings along with the drawings, some of which I can tell had to do with several different relationships I was going through at the time but are in some sort of shorthand that makes no sense now, so I presume I expanded on them elsewhere in other writings that I haven't unearthed yet. I did notice that writing overtook drawing at some point, and I changed that by having two separate little books for those different outlets.

Also linked to the past in a way is an exercise on Facebook that I'm involved in right now that involves artists, when people "like" the post, you give them the name of an artist and they are supposed to find something of theirs that they like, whether they know the artist or not, re-post it and spread this virus even further. It'd be nice to see Facebook full of more artwork than ads by the end of the week (although I have ad-blocking in place). I was given Salvador Dali, which was an easy choice, as he was an early inspiration of mine. I also recalled that when I was in art school he was barely covered in my art history classes and he also passed on during that time too.

I've noticed thus far that I've chosen more recent artists than older ones, which probably says a lot about me. In fact I did find a lot of art history uninteresting. Dave McKean, Moebius, Michael Parkes, Joel-Peter Witkin, Ralph Steadman, Masamune Shirow, Aubrey Beardsley, Rick Berry, Mark Ryden, HR Giger, Max Ernst, Robert Williams, Man Ray, Rick Griffin - not many of these are ones you'd find in a big 'ol museum. At least not yet.

So that this posting isn't bereft of visuals, here's a shot of last Saturday night, when we got our first big snowfall of the season. 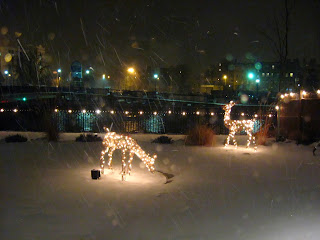 Email ThisBlogThis!Share to TwitterShare to FacebookShare to Pinterest
Labels: art past, contemplation, photography

Slight pause in working on the photos from the last shoot, as I may have said before, I'm planning one that may use possibly ten layers and I need the right time and state of mind for that. Sometimes.

For the past few days I've been looking through a box full of old sketchbooks that I filled up, little ones that I would carry around with me anywhere should something pop into my mind, and it appears that it often did. I'm up to 16 of these things by now, which I started around when I went to art school. Appropriately enough those early ones were filled with ideas for class assignments and some very ambitious ideas that didn't bear fruit. It appears sometimes that I'd have just a title or a character and I'd think it would lead to a comic story of some such, but it didn't always stick. I have no idea where I got something like "Pinkfish Rising" from, and apparently I was stuck after that. There are plenty of "cool" song titles and lyrics and such scattered throughout, too, not that I made music beyond some bizarro noisy tracks and collages that I really need to get off of cassettes and into digital format soon. 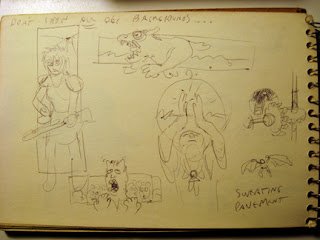 At times these little books are like a diary, I can definitely trace the rise and fall of one relationship and the long desert after it just from the drawings and what I wrote -  I'll spare you the writing -  plus notes on concerts I saw or trips that I took, like my first time to New York City (wasn't that good), and lists galore. I still make too many lists, this just reminds me that I need to get better at following through on my ideas and plans. It's just that too often real life gets in the way. 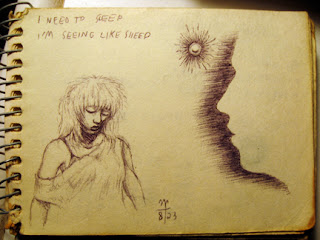 So I'm still not one for resolutions but I hope to improve upon this in the new year. Just looking at these sketchbooks alone show that I should have a much larger body of work. 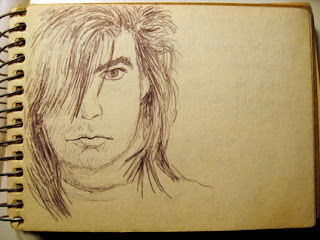 Email ThisBlogThis!Share to TwitterShare to FacebookShare to Pinterest
Labels: art past, sketching

More photowork from the recent photoshoot. I have one in the works that may be a combination of possibly ten different shots. This one is interesting, in that I was making a conscious effort to not use the auto settings on the camera, in the hopes of learning about it more, but I tried it on a few shots, and it inevitably pops up the flash, even in the daytime, so this was an interesting result but totally not what I was aiming for on the whole shoot. 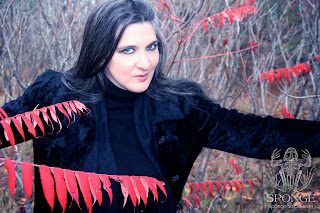 Speaking of learning, I've recently started an online course in photography, as there are still aspects that I could use improvement in, and I don't have the time nor money to go to any local schools/classes. I've only seen the first one so far, which was as basic as basic can be, but I hope things pick up a bit. The speaker thus far is not very animated, and if the .ca website address weren't already a giveaway, he's clearly Canadian and I keep hearing subliminal "ehs" in his speech. We'll see how this goes.
Posted by Matt Towler at 9:49 PM No comments: