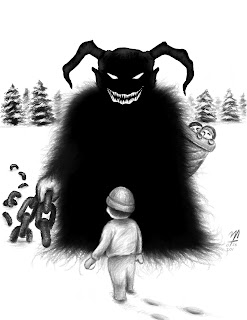 Here's the latest artwork I've done - it's for an upcoming art show in Salem (details below), and was done entirely in Painter and with a Wacom tablet, which is still new to me, and I feel that I am improving with each piece. I decided to keep it in just black and white this time. With all the snow, it kinda made sense to me.


Update: this piece was bought at opening night!!

It's that time of year again!

Join us for the opening night of our 2nd annual KRAMPUS Group Art Show! One fearsome, furry theme - many talented artists! Saturday December 4th from 8-10 PM. Meet the artists behind the artwork! Delight in the musical talents of DJ Zombi! Who knows --Krampus might even make an apperance!!

Not familiar with the legend of Krampus? Go to the following link to find out more:
http://en.wikipedia.org/wiki/Krampus

Can't make it to the opening night shindig? Don't fret! The artwork will be available for viewing all month in our Red Room Gallery.

A long time between posts, a sure sign that I've fallen in productivity again, despite October being a month of much exposure, and the piece that I showed the creation of in a previous post, "Blood Memory," was actually sold! I wonder if it was the price that was part of it (a lot lower than the rest of the art on display), and if it's time to raise them a bit for next time. I was also concerned that the piece in question wasn't finished, but apparently whoever bought it didn't feel that way.

I also had a doll on display this past weekend, good exposure if not a sale. Gotta look for more shows to enter into.

Also visited an open studios event, which still gives me mixed emotions, mainly how I can't manage to find such a space for myself, and to be blunt, I often wonder how some of the people who do have studios manage to get them. More have been offered by the BRA, again listed as "affordable," but if they're only for sale or if the rent is over $1000, it's not affordable in my (check) book.

There's another art show opening in Salem next month. There's absolutely no reason why I can't make something by then.
Posted by Matt Towler at 8:54 PM No comments: