Slow week for creativity, namely because of one of those holiday weekends, and one in which one is expected not to do much, work-wise, and I succumbed but of course felt guilty later. And full of too much cookout food. The job search continues, without any success yet; I need to rethink my strategy and soon. I'm taking the next week off from work; alas,  they do not pay me well enough to be able to travel anywhere. One of the plans for the week is hopefully a new photoshoot.

So, in lieu of leaving this blank, here's all the places where I am currently on the sticky web:

:sponge: - my main site, and yes still in need of a redesign. I want to just pick a wordpress design and get it over with. Any suggestions are welcome.

deviantArt - another gallery but you can buy prints, and other ephemera here.

jpg - same deal, although I put what I feel are my "best" ones here.

Instagram - I try to make it arty. No pictures of food need apply.

Etsy - this site seems mostly for crafty stuff, so far I just have postcards, I plan to add framed artworks.

Model Mayhem - as the title may lead you to believe, model-oriented photography.

Email ThisBlogThis!Share to TwitterShare to FacebookShare to Pinterest
Labels: artwork, for sale, websites

The creative urge last week was satisfied, mostly, by photographing at the annual Boston Zombie March. This was the 9th one ( there wasn't one last year - having a parade of corpses take place soon after the Boston Marathon bombings would've been in poor taste to say the least ), and if the news is to be believed, the last one, at least one organized by the fellow who had done so all these years. Just as well, I think I'm done photographing them. There's only so much I can do that's not similar to shots from past years, and to be frank I didn't find this one up to par to previous ones. But as ever there was well-done makeup, partially my reason for bothering with it at all. 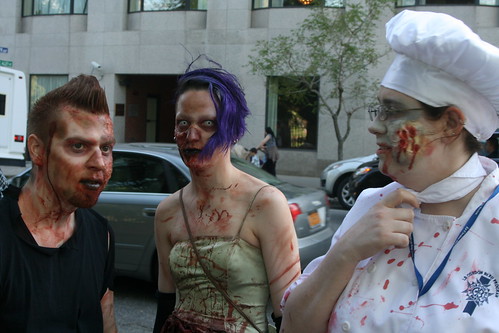 See all the photos here.

I have been taking a break from art to focus on a job search, but I'm finding that completely cutting it off, especially when I fought so hard to regain it, is not the best idea. So while there obviously won't be an art project for May, I'm at least sketching here and there. Nothing worthy of note this week.

Last month I was interviewed for a video project on artists, here is the final result. We talked for an hour or more so obviously this is heavily edited. I of course cringe looking at it, but that has more to do with my appearance, so I just need to Get Over It. I was even told by one of the creators that "almost everyone who has seen it has had a super positive reaction to me in particular." so what do I know.

We lost a big one this week...artist HR Giger passed away. I've already mentioned elsewhere that when one says "Gigeresque," you know exactly what that means, even if it can't be put into words. I think it's testament to his artwork that it can be recognized instantly as his own. I certainly would like the same some day, however since I am not one to choose one style of artwork yet, I can't say that's the case today. He was certainly an influence, if not in style or subject matter, but in the quest to be completely original. I am still on that quest. 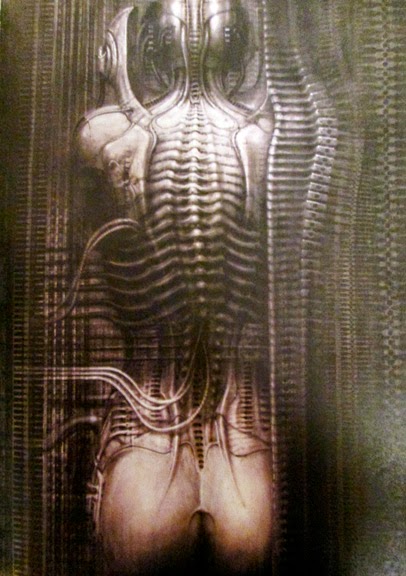 On that note, regarding my own artwork this week, all I've done other than the usual photo-taking whenever possible was a return to the Boston chapter of Dr. Sketchy's. This time around we had two members of the burlesque troupe The Slaughterhouse Sweethearts (plus a monkey puppet). Perhaps it was because of the extra numbers on stage, but I didn't do so well this time, in my opinion. Took too long on the drawings and didn't even include both of them at times. It's good to keep up the practice, of course. But I hope I complete this job search that's taking up my time now so I can get back to my real life again. 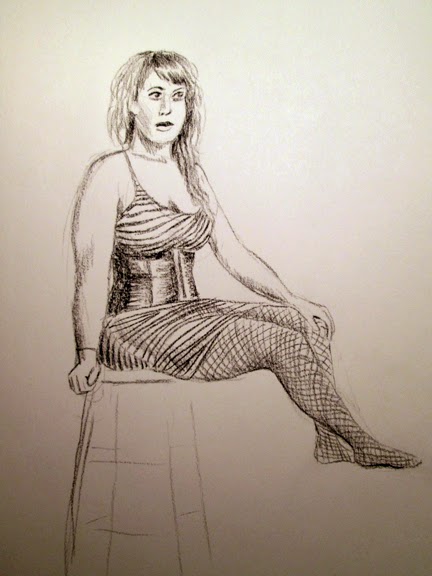 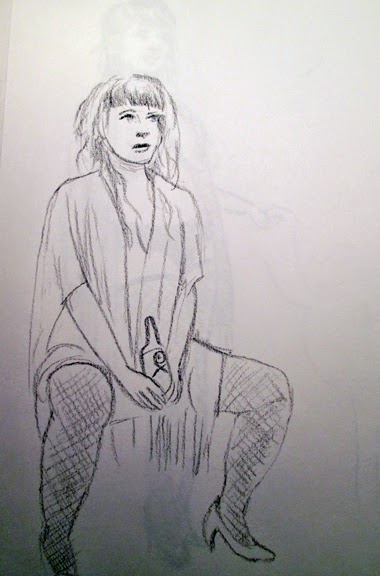 I finished the most recent monthly art project, a few days late, but I'm still going to count it as April's. Once again, I was aiming for a pin-up feeling similar to the work of Gil Elvgren, so even though it was based on a photo, I tried to make it look a little painterly, and certainly with brighter colors than I usually use. Believe it or not I agonized over that background color choice for hours. 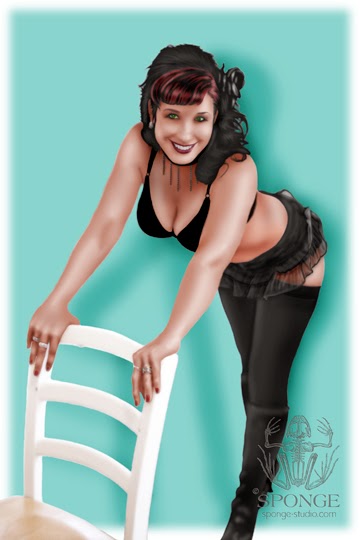 Okay, I cheated a little bit and kept the chair and some jewelry from the original photo, my drawing abilities weren't up to that task by the end of the month, or maybe I was just impatient to finish. As per usual I could've kept working on it but like most of my artwork I have to know when to stop. And you know what? I realize now that it might've been easier to just erase the background from the original photo, but I wanted to test myself, plus get more used to drawing on a tablet. I still feel that I'd do better with a desk arm for it, still on a quest for that.

And while I still want one of my goals for this year to be having a completed work for each month, sadly I must scale back for a bit, for I have the burning need to escape my current day job for something better, and before July for reasons I won't go into here, so I must make my job search a priority now. I still would love one that utilizes my creative talents, but I haven't found one yet (or at least one that'll hire me) so far in this life. I've been working on getting into the video game industry, and making some inroads, but it's been a slow process so far for one who doesn't have experience yet, and as I said, tick tock, so I'm looking for an interim job while I pursue that further. I've been thinking that if I can't get a job making art, maybe I can at least be around it, so I'm going to look into museums and galleries.

I'm still going to write this weekly, not sure what about yet, but I don't plan to give up art in the meantime, not when I've fought so hard to regain it, just probably no big projects for the next few months. I may return to Dr. Sketchy's this weekend. I may look into my past again.
Posted by Matt Towler at 10:36 PM No comments: