Slow week with a few non-art things taking up time. I did get to try scuba for the first time ever, which gave me the sensation of what it might feel like to float in space. And most of what you hear is just your own breathing. That's the first thing they told us, never hold your breath.

I also got to go to an epic water gun fight, much needed in the heat wave that we had. So everybody won, basically.

Posted by Matt Towler at 9:11 PM No comments:

I returned to Dr. Sketchy's this past Sunday, so yay, I finally broke my once-a-year attendance. Once again the model was a burlesque dancer, Dewey Decimator ( and yes, she's a librarian during the day ). As ever they have the best props & outfits. She started out as some sort of lion, then a Viking, and finally a Vegas showgirl, losing bits of the costumes along the way, of course. There are often contests to add crazy elements to the drawings, and I won one of them. Basically mine was to make her Viking pose less "Viking," so I gave her and the severed head prop big anime eyes. I can't show you because I also gave her the drawing, but it was only a two minute drawing anyways.

Like before I found myself focusing on certain details and ended up not finishing some drawings when time ran out. So by the end I wasn't drawing the whole figure as I usually do. Heh, I like how the last few almost look like religious paintings, with her Vegas headdress looking like a halo. You could probably fill more seats in church this way. 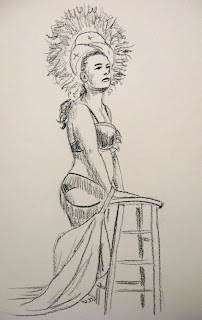 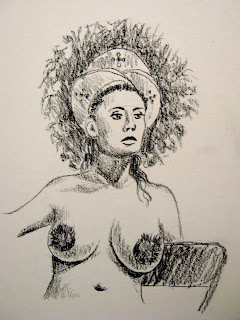 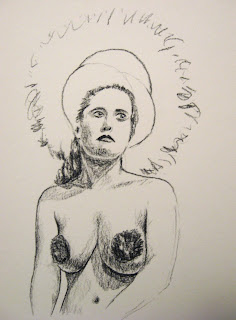 "Holiday" weekends slow me down even if I'm not really celebrating, but I guess being out with others who are counts as well. I attempted to take some picture of fireworks, but foolish me forgot the tripod and there aren't really many that I find worthy to display. I did like this accident, though: 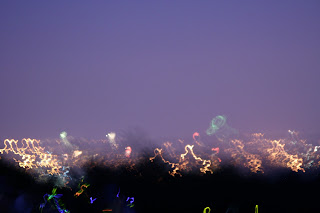 Still sketching away in the Sketch-A-Day book. I'm particularly pleased with these two, which, as ever, came out of nowhere that I can trace in my mind. 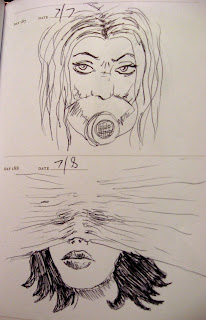 On a whim I went looking online for books of artwork by Patrick Nagel, and found one for very cheap on Amazon and purchased it. I don't know exactly why his work has been on my mind as of late but I'm just going where the mind flows right now. 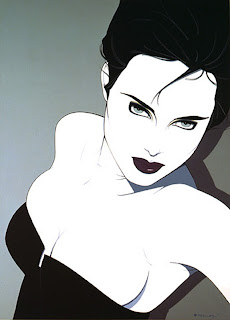 His work may scream 80s to most ( or, and I have no idea why this has become the norm, nail salons ), and certainly some of the hairstyles and clothes may cement it to that time, but I find most of his depictions of women timeless. Clearly he was fascinated by them ( although there's a quote by him in the book about the ones he depicted: "I don't think I want to know these women too well. They never come out in the sunlight. They just stay up late and smoke and drink a lot." ), and it's no surprise that most of his work appeared in Playboy.

I guess what I'm impressed with most is what he accomplished with as few lines as possible, that and the otherworldly eyes he gave them. Plus what he produced within his short life, he died before he was 40 under tragicomic circumstances. Very sobering, as I feel I haven't accomplished half of what I want to and I'm now older than him.

Very little of what I've done directly references his style, although I did take a few stabs at it. This one was done for a flier at the goth night that I DJ at, I was shooting for Siouxsie done up in Nagel's style. 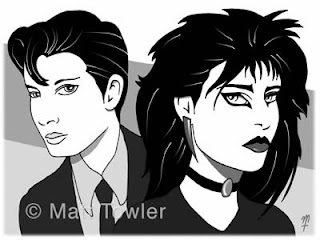