Hrm, nothing new to show since last time, although I am doing better at getting ideas and sketches down. I have a sketchbook with me at all times. I'm going to try to use one of my breaks at work to sketch instead of read like I normally do.

In other news, I hopefully have at least two photoshoots coming up before summer's end, one with somebody I've worked with before, another one that's new. I have ideas for a third, but I need to find an indoor space for it, and for her schedule to open up.

I still take a camera with me everywhere, and have gotten some good candid shots, of summer skies and recent flooding in the area. I tend to post all such shots on my flickr page.

Going to attempt to sell artwork at this event in Salem, MA tomorrow night.
Posted by Matt Towler at 10:06 PM No comments: 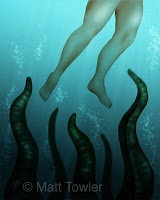 Boy, it's a sure sign of my need for better discipline if I can't write in here regularly, huh? Let's catch up. I did not accomplish as much as I hoped in the past month. I see each new month as a new beginning, so I guess I have 12 New Year's resolutions per year that way. Gotta get cracking on the books and programs, but summer doesn't inspire that sort of behavior, especially with the scorching weather we've had the past few days. And no, no sign of a better place to live yet, thanks for asking.

But! I DID complete a new artwork! Did most of it with the Wacom tablet. Well, all of it actually, but the legs I had to draw on paper and then trace on the tablet. No idea why it's a chore, I've done more detailed work with a mouse in the past. I think it's because the tablet is set up so that a point on it corresponds to a relative point on the screen. If the stylus leaves the surface, you lose your place.

This was for a show called "From the Depths" held in a store called Fool's Mansion in Salem, MA. The deadline helped in this case, I finished it all 2 days before it was due. I've tried giving myself "fake" deadlines to get my ass in gear, but I can't fool myself. Of course, with an actual deadline, I then tend to see things I could've done if Only I Had More Time!
Posted by Matt Towler at 9:32 PM No comments: