We sometimes give time more power than it really deserves, especially on the psuedo-holiday of New Year's Eve. The social pressure to do something, anything to mark it can get overwhelming, when it's really nothing more than a calendar page change. Even a momentous one like 1999 to 2000 was a bit underwhelming in the end, although I did amuse myself by watching the new year transverse the globe with no disasters occurring like many thought would ("New Zealand's still here..."). Not even a Y2K bug. That said, I think I chose the stay home alone option maybe once in the past twenty years, but that's easy to do when you have no significant other. 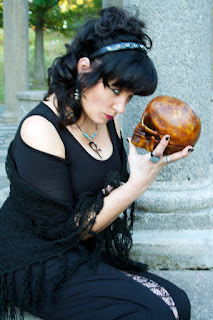 That said, I do have plans for the new year, certainly in the creative side of my life and I'm sure I'll get to talking about most of them in here in the coming weeks. For now I'm finishing up the initial edits on shots from the October photoshoot, and we'll see where I go from there in the new year. 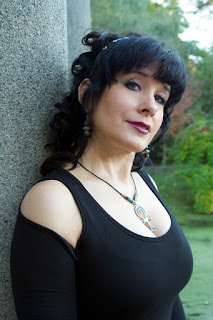 After an unseasonably warm Xmas, winter has finally arrived, and one thing I plan to do while likely being snowbound at some point is work on more Homunculus dolls. I haven't made a new one since 2013, and I'd like to see if I can get a gallery show for all of them again. The last time that they were all together in one space was in 2009. 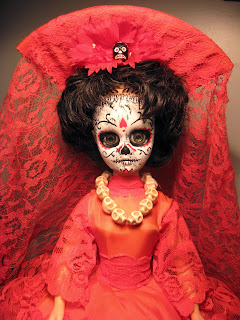 See you on the other side.
Posted by Matt Towler at 10:15 PM No comments:

More shots from the October photoshoot. This was at the end of it, when a wooden skull was the prop, and things got sillier, as you'll see. 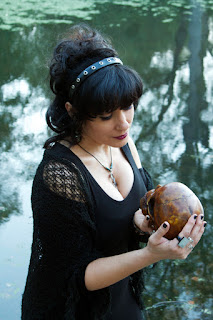 As the year winds down, naturally people are looking both at the past year and what the new one could bring. I still tend to re-examine where I'm at at the start of every month, but a new year is a typical place for bigger plans, though I don't consider them resolutions. I'm sure I'll have a year-in-review entry soon too. 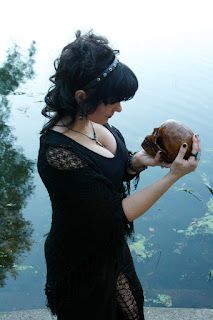 One thing I need to address is stepping up my photography skills. I believe that I am improving but can still do so much better, and I know a lot of it has to do with technical knowhow. Exposure settings still aren't a natural skill for me. 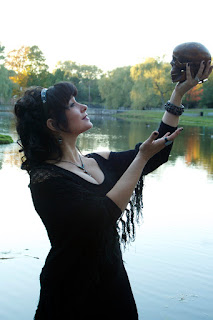 Instead of hoarding objects, unfortunately I tend to be a hoarder of information, which is even easier in the digital age. I will download guides and tips and they remain unread, so that needs to be addressed. I saved them for a good reason, one would hope. 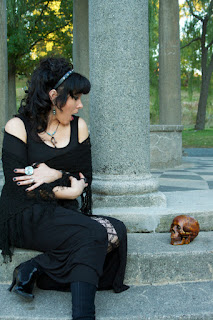 Another issue is the long-delayed website redesign. It's been far too long, and there's no good excuses other than too many options to choose from, minimal coding skill, and no money to pay someone else to do it. So that needs to become a priority.

Linked to that is this blog, I suppose. I've gotten to the point where I've done a weekly entry without fail, which personally I think is impressive. And while it's partially for myself, to track progress and such, the lack of any sort of feedback is a letdown at times. Comments are allowed below, you should try it out sometime. I believe it can even be done anonymously if you so wish. Otherwise I'll have to consider abandoning this at some point in the coming year. One can yell into the void for only so long before tiring of waiting for a reply back.
Posted by Matt Towler at 10:23 PM 4 comments:

:long ago and far away:

I'm still working, slowly, on the photos from October. If I get an hour in a day I feel successful. Ideally I'd like to have the whole day, but, well, I'll get to that point some day. These are just the first steps, color correction and some editing, I'm not entirely sure where I'm going yet but these aren't the final results.

I really like this shot. She looks both at ease and strong and if you knew anything about the kind of year she's had, you'd be glad to see it too. 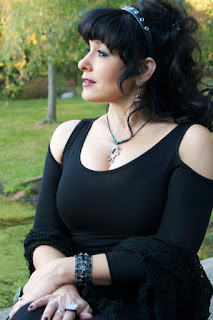 And I've said it before, but adding props just seems to add something to the shoot as well, in her case. 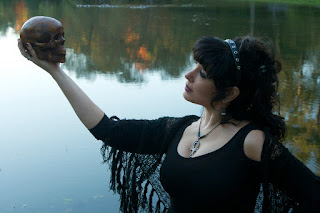 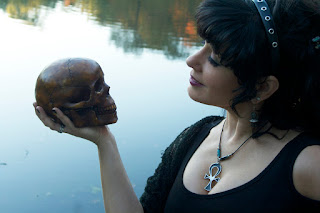 Unless you've been in a media black hole, and I honestly can't judge someone who is, you may be aware that a new episode of "Star Wars" is out this week. I was around for all the previous ones, and saw the original, unaltered one in the movie theater when it came out. It definitely sent my artwork in different directions to say the least. I managed to unearth this ancient drawing of what is probably still my favorite character. 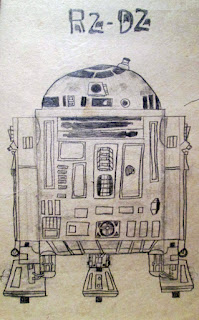 I have returned in earnest to working on photos from the October photoshoot. The thought had entered my mind to delve into my art as intensely as I did writing in November, but it can get exhausting really fast, and sadly there's many real world things that need doing as well, some of which were put aside for a month as it is.

I generally don't like using flash, or at least the one attached to my camera, so I may look into external ones soon. But by the end of this shoot the sun was setting and from certain angles there just wasn't enough natural light. However thanks to Photoshop I'm trying to recover a few of those. I also worked with reflectors a bit in this shoot as well, but the wind often played havoc with that. 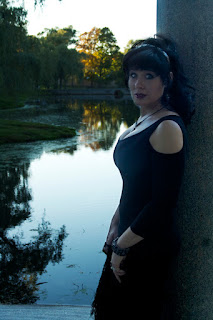 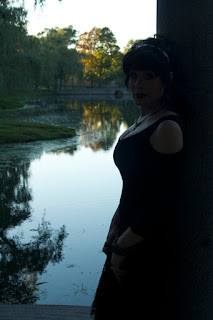 Right now I'm just going through the roll of shots and cleaning up the ones I like best, but these aren't going to be the final versions, I plan to return to my method of adding layers and such using textures. 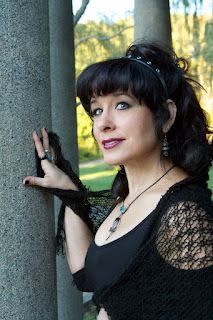 Another casualty while I was writing all last month was photography itself, I didn't take photos of anything, not even for Instagram. I made up for that this past weekend in Salem, MA, where a small horde of Krampus (Krampuses? Krampi?) temporarily terrorized the streets and a few bars, looking for the naughty. More often than not they offered themselves up willingly. 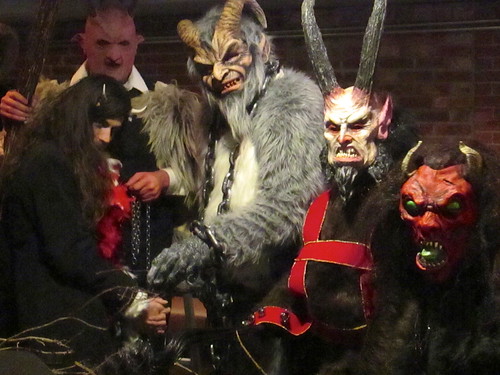 As ever, more shots on my flickr page.
Posted by Matt Towler at 9:59 PM No comments:

I managed to once again finish my 50,000+ word NaNoWriMo novel, and a day early again too. I'm amazed that I was even able to, what with all the frustrating car stuff that was, and sadly still is going on. So that's the biggest lesson that I'm taking away from it, that I can complete something even with a strict deadline and a world of shit going on around me. It was basically a month of dayjob, car shite, and writing. So other things have suffered during this time, like gym time, and other creative projects, and what social events that I was invited to. I had thoughts of trying to keep on this sort of schedule to get other artwork done. but it can get really exhausting, and isolating. The local NaNo folks hold a bunch of write-ins throughout the month, to try and keep some social aspect to it, but judging from the ones that I went to last year, it actually slowed me down, so I guess I'm not a "social" writer. Not if I want to complete a novel in a month, anyway. 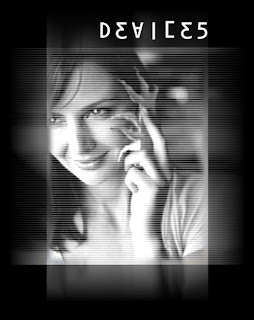 Once again the story took off in directions that I had not planned on when starting out. It was supposed to be fairly dystopic in tone, but then it ended with a fairly upbeat conclusion, with touches of caution. I had at least two male characters that I thought would be the main ones, but they faded into the background in favor of two female ones. There was also a weird sexual aspect that emerged that wasn't planned from the beginning either. Again, it's all open to analysis, I'm sure. But I'm not even looking at it again until January at least. I already want a better title for it at least. 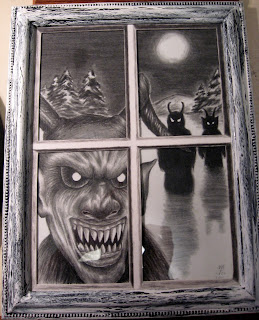 After Thanksgiving, there's just no holding back the Xmas juggernaut at all anymore. But the word of Krampus grows more and more with each passing year. There'll be some Krampus-themed events this weekend in Salem, MA, of course, including an art show that I have artwork in. Not a new piece, alas. I'll also mention again the book "Contemporary Krampus" that I have a different piece in. I would choose him over Elf on A Shelf any day. 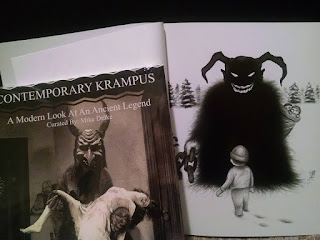 After such an intensive month spent writing, there has to be some decompression, but I need to get back to other projects, hopefully more so once all the car bullshite is settled. I still need to go through the photos from my October photoshoot. The model mentioned today a wish that she could do an Xmas-themed pinup shoot. That sounds like it'd be fun, alas not likely for this year's Xmas. 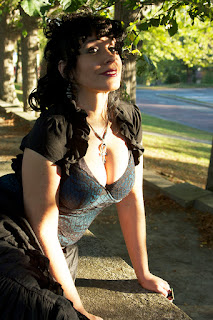 Posted by Matt Towler at 9:15 PM No comments: