You may ask by now, what went wrong this week? Hopefully that won't always be the case, but not so this week; I'm currently trying to fix some financial mess due to somebody somehow getting my debit card number and overdrawing my bank account. It seems to have happened near Toronto, so I am confident it will end in my favor. Damned inconvenient though, and has derailed me from the focused path I was trying to stay on.

I did get out last weekend to attempt to photograph the "supermoon," supposedly when it's the closest to Earth and at its brightest. I went up north out of the city to Rockport to give it a try, also taking this time to try and learn about exposure times. If you leave it open long enough it looks like it's daytime.

It has been suggested to me that perhaps I should use artwork as a therapy of sorts to get through certain issues I'm dealing with. I've made some attempts; I haven't seen any help from it yet. I remember telling this person that I don't WANT to draw such things, I have too many OTHER things that I want to get to! But some say I have to work through this first.

One of my favorite episodes of the current Dr. Who series was one where he met Vincent Van Gogh. They had to involve an alien creature to make it sci-fi I guess, but what stood out for me was when The Doctor asked a museum curator in the present time, with Van Gogh within earshot, how he felt about his artwork. The basic gist of his reply was that even though he had led a tortured life, he chose instead to depict the beauty he saw in the world than the pain that he felt. Which is in a way how I feel about what I want to accomplish.

So yeah, I kind of feel like what you see below. Except I don't feel like a woman, you can disregard that. 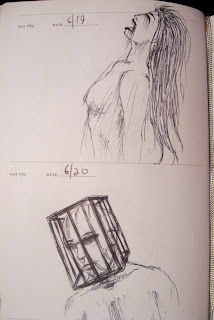 Posted by Matt Towler at 9:48 PM No comments:

I revisited the Boston chapter of Dr. Sketchy last weekend, haven't been there since last year. Hopefully I'll go more than once a year if I can help it. For those of you unfamiliar with it, it's a figure drawing session, but done in places like night clubs (Great Scott in Allston in this case), and the models are often  non-traditional ones like burlesque performers. So instead of starting out unclothed they end up that way (well, not completely, but pasties & panties are close enough).

The model this time was one Allix Mortis. She actually started out in a grim reaper costume. Those were for the minute and two minute long poses I'm afraid, so I don't think any of them worthy of inclusion here. Figure drawing sessions often start out with quick poses like these so this event is no exception. Gradually they move up to longer ones, 5, 10, 15 minute ones.

I felt she had a very expressive face so I often focused on that in my drawings, which is unusual in that one usually is more focused on the body and pose, at least what I've seen at such sessions. So a few times I ran out of time and didn't complete the entire rendering. 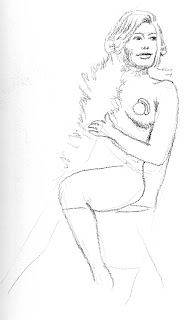 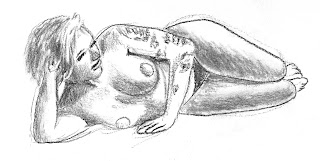 I didn't write an entry last week, it was not a good time for me in many ways, which of course affects the creativity. I still feel a bit stuck and am doing my best to get out of it. It's not as easy as some may think. I'm likening it to a sports injury, you have to wait to get better before you can proceed as you did before. Having spent a fair amount of time practicing taekwondo in the past, I know what that's like.

At least I'm still keeping up with my sketch-a-day book. I've only missed one day this year. I don't know what half the things I draw in there "mean," I'm just trying to get something, anything down on paper, and stretch out those creative muscles. I feel like I'm on an event horizon, something's going to surface and flower soon, which is probably a really mangled metaphor. 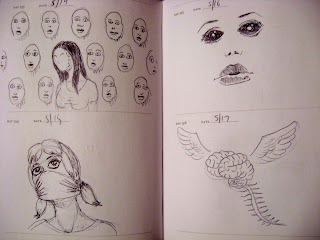