I'm determined to have something new up here each Wednesday, so tonight I dabbled in Painter with the Wacom tablet, still learning. SO many brushes and styles to choose from! I tend to stick to one for too long. I like how the rose came out more than anything in this. This is copied from a photo, but I do have an idea in mind involving Dia los Muertos. 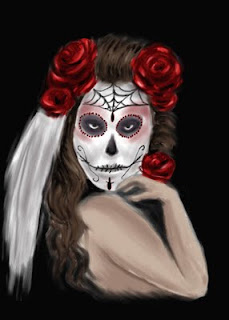 Nothing new to show this week, so I'll guess I'll post the many ways you can get artwork of mine, if you're so inclined or reclined or Patsy Cline.

I have an Etsy page too, but it's closed for now, the fees were a bit much for something that wasn't working, sales-wise. It's also more of a crafty place than one that people will buy prints from, at least in my experience.

I can also make some pretty decent prints on my home printer if there are pieces on my website that aren't available through the above options.
Posted by Matt Towler at 9:47 PM No comments:

I really want to write in this thing more regularly, creative slump or not, so let's shoot for Wednesdays, hokay?

I've learned over the years to always have some sort of sketchbook with me, even though I also used whatever scraps I could find. This was frowned upon at some shit jobs I've had. Better you do the retail oxymoron of "looking busy" rather than anything creative, or god forbid, look *relaxed* while on the job. Sorry, was I screaming again? Anyways...

I have larger sketchbooks but also smaller ones to carry around. I noticed that the last few were a combination of sketches and notes and shopping lists, and not enough of the former, so I have two separate pads for that. And those of you who know me wonder why I still lug a messenger bag around.

I'm doing my best to sketch more. Some may became major pieces some day, some are already on that way. It's still a pity I have to find the time to do it, or it takes a long time to spark it. Non-creative environments at home and at work aren't helping. Maybe I'll go into the laptop jungle that coffee shops are now and draw there, but truthfully, that's not my scene. And I don't drink coffee. 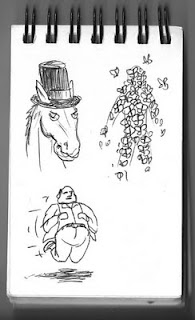 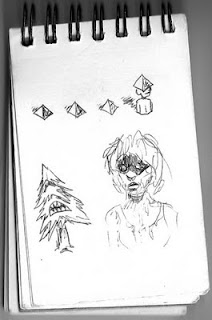