I ventured out last weekend with the camera to try and find something, anything of interest to photograph. I went to the ocean first, as that usually lifts my spirits, but despite the calendar saying that it's spring, it was pretty cold and dreary. And as ever, the sight of human trash angered me, even with trash barrels nearby, humans still feel like they can just toss their refuse anywhere.

I kept driving north, keeping by the sea in the hopes of finding something there. For a state with a fair amount of coastline, Massachusetts doesn't have a lot of nice beaches. Mostly rocky, and that's if it's actually an area open to the public. I've had the dream of living in a place by the ocean, but with global warming that seems unwise. I'm sure we're going to lose Cape Cod at some point.

I take for granted how old this area is and often wonder what tourists are taking pictures of all the time. It's just a building! But they're really OLD buildings, I guess (lord knows I've lived in a few of them). I stumbled across a really old burial ground in Marblehead: 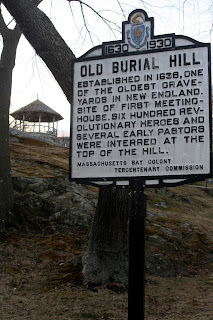 Many of the tombstones were so weather-worn that you couldn't read them, many were fallen or about to (I don't know why they don't fix them), like crooked teeth. 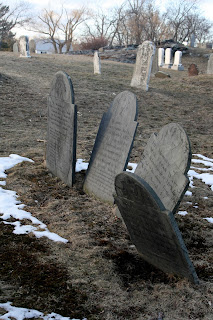 And some interesting writing or artwork on some of them: 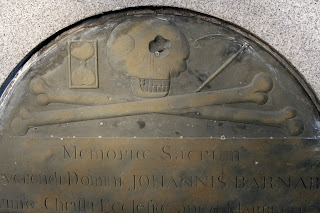 While in the process of the eternal unpacking - actually it's not really unpacking as a lot of what I own stays in boxes just for storage reasons, but I'm looking to get rid of anything possible - I came across a box full of my sketchbooks of all sizes. 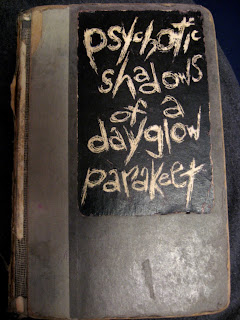 Skimming through them, I can remember the points of time in my life that they are from ( not just from the dates either ), so these are often like journals or diaries, and similar to those as well have the expected embarrassment from certain parts, so maybe I should leave notice to have these burned upon my death. 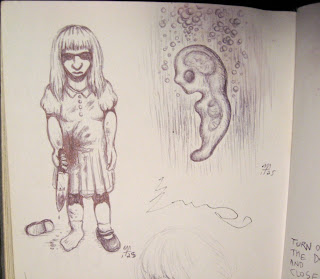 Aside from the stumblings and assorted little notes to/from myself scribbled within, there's still some good ideas in there. I have often thought that even when the well of creativity is a bit dry, I still have a source of old ideas to choose from. No shortage there, just of time to create them in. I'll be digging in these some more in the future and maybe posting more images from them. 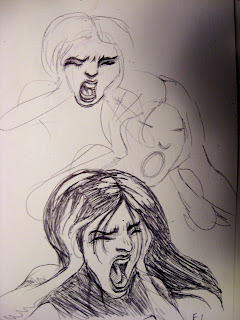 Email ThisBlogThis!Share to TwitterShare to FacebookShare to Pinterest
Labels: art past, sketching

A bit of a long week, and a bit tiring, mentally, so nothing new to report for now. So let's hope for an early Spring.

:for sale or rent:

The aftermath of the RAW show...it was interesting experience to say the least...if not a profitable one. I was hoping to make at least the cost of the unsold tickets, but it was not to be. So was it worth it? Well, it helped me to talk to people more about my artwork, at least those who weren't afraid to approach that is ( if you saw the setup at the club you'd understand - it's like we were on small stages and maybe they weren't sure if they could step on them. I had to keep saying COME CLOSER ), and when the music wasn't too loud. I've done showings in nightclubs before, generally people aren't out to spend money on art in such places, even though things are more convenient with devices like the Square with which you can charge for things through your smartphone. Sadly, I didn't get it to break it in. 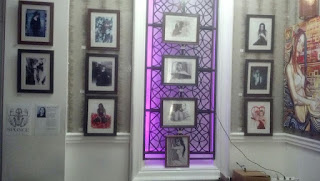 I gave plenty of business cards out as usual, so you never know where that may lead, and the Homunculi dolls were a hit too. And the artist statement I labored over for so long actually helped one patron understand my artwork more, or so he said. Still didn't buy anything, though.

But one issue I had ( and have had in the past ) was people taking pictures of the artwork with their phones. If it was a occasional occurrence that'd be one thing, but some people were taking pictures of everything. Some of the artists shrugged it off, but my way of thinking was, well if they take pictures of the artwork, there's no reason why they'd buy it. And then the starving artist cliche moves into the 21st Century.
Posted by Matt Towler at 9:58 PM 2 comments: