As threatened/promised last week, I'm going to talk about these wicked little stories I created when I was younger that I recently thought of and managed to unearth. Lucky for me (?) I kept damn near everything I've drawn and written, no matter how embarrassing it may look now.

A good part of my youth was spent making my own comics, one was a major one that I started after seeing "Star Wars," in which I borrowed from nearly everything I read and saw, comics, movies, and TV shows, one reason why it'll never be published. It was also never finished - high school got in the way, and then college, and then real life - but I know how it ends in my head, at least. They do get an ending. I'll go over that comic some other time.

But around the same time, I'd say when I was 13 or so, I started writing and illustrating these vicious little stories in which these little dogs which I called spaniels, even though they were really crudely drawn at first, that met many bloody and gruesome ends. It seems that I even kept meticulous notes on it, thinking that some day somebody would be interested. Hell, I had all these plans for several volumes of stories, and animated movies, I even chose songs for the soundtrack, and designed video games based on them. Quite the dreamer I was.

The nearest I can tell about the genesis for this was my being a cat person, and at the time there were these "humorous" books out about "101 uses for a dead cat," which I guess offended me enough to retaliate against the obvious. I made these dogs SO stupid that they almost invited death. They would get frozen with fear, whine and sweat (not something dogs normally do, but it made sense in a cartoon sense). But killing off cute little doggies is a bit of a hard sell, I'll admit, so a weird sort of mythology developed around them.

Turns out these are not normal dogs, but alien ones dropped off on our planet, from a planet called Strax where they were bioengineered, but they soon overpopulated (they have two day long gestation periods and breed like rabbits - the males are horny little bastards) and threatened their planet with deforestation (they were herbivores, although in some stories I had them degenerate into cannibalism of their own kind). Which gave (I thought) valid reason for the slaughter of them. The original stories were about the different kinds, due to wherever they were dropped off and "too stupid to leave." Tree, arctic, cave, city and, for some reason, English spaniels. 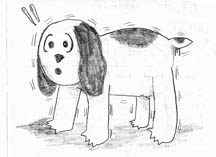 Looking at these now I cringe at the bad writing and crude drawings, but hell, I was only 13! But I did see improvement as I went on. The city spaniel story, meant to be the last one of the "first" volume, was pretty well-written, I thought. The second volume, which was meant to be about the final "death hunts," never got written, they were more storyboards for imagined animated movies. Seeing both "Watership Down" and "Heavy Metal" clearly inspired me. The third volume was supposed to take place on their home planet of Strax. I only got one story done, basically sketched out but never fully illustrated, but I read it now and the black humor in it still makes me laugh.

It's called "Friendship," and I even found the original story idea, written on the back of some school vocabulary test:


1 - two pups are separated in woods
2 - both find the same female a year later
3 - they fight over female for two days
4 - pups are born, and they apologize
5 - bomb destroys them all

I don't know, something in me really liked building it up to a sappy ending only to yank it away in the end. There is foreshadowing in the final one so that the bomb doesn't literally come out of nowhere. 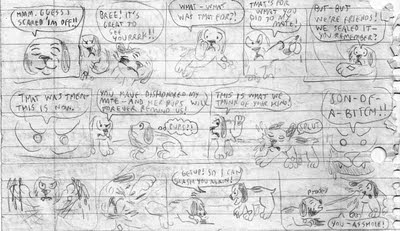 I also gave them foul little mouths, it seems. I've no idea why I drew it on such crappy paper, though. I guess this was meant to be a rough draft. I have other pages pacing out the story better, but they're even sketchier, pencil-wise. Oh so many unfinished projects in my life.

So who needs subtlety? 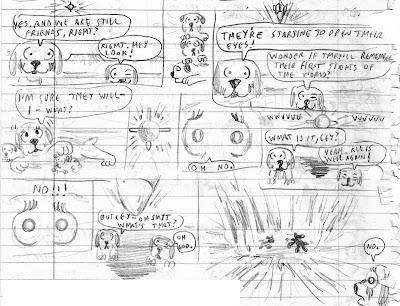 Like I said last week, I'm lucky no authority figures or parents saw these back then, they'd probably put me away. Then again, the stuff that kids today can see accidentally online pales in comparison, I suppose.
Posted by Matt Towler at 10:14 PM No comments:

Email ThisBlogThis!Share to TwitterShare to FacebookShare to Pinterest
Labels: art past, comics, spaniels

Nothing new art-wise this week, but I did take a lot of photos at MIT's FASTlight this past weekend - a celebration of MIT's 150th anniversary involving a lot of installations combining art & science. Every time I get to wander around MIT I wish I had been smart enough to go there, it seems like an inspiring place, and with places like the famous Media Lab, there's places for artists there, too. Maybe if I had learned about making video games back in the 80s rather than playing them... 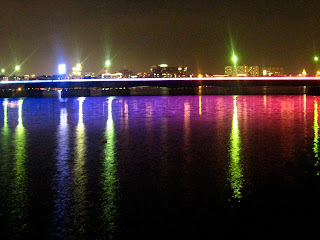 More pics from this event on my flickr page.
edit: I was editing this post and stupidly posted it as new post. This one should be dated 5/11/11.
Posted by Matt Towler at 10:32 PM No comments:

It's gotten later than I thought tonight and there's not enough time to write what I wanted to. So, instead, a peek of what I was going to write about and hopefully next week...some rather bizarre comics and stories that I wrote in my misguided youth, which, looking at them now, I am lucky that no authority figures saw at the time. Surely a disturbed young boy, they'd think. Best to put him away. 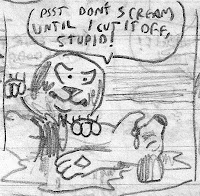 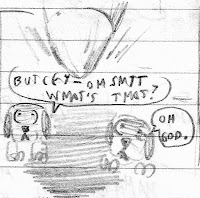 Email ThisBlogThis!Share to TwitterShare to FacebookShare to Pinterest
Labels: art past, comics, spaniels

There was a time when I was going to figure drawing sessions regularly; I really should get back into that. There's no shortage of such in the Boston area. 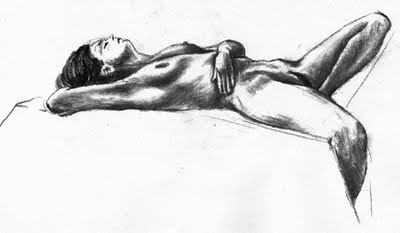 I first started at art school - I don't know if any high schools are or ever were progressive enough to have live modeling.  Often the first thing people asked me about art school was "you get to draw nekkid people, don'tcha?" And I had to explain that, yes, but we aren't usually talking supermodels here, or even always female models for that matter. 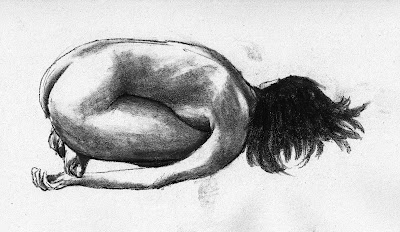 Then I would try to explain that after awhile, you are concentrating more on shapes and shadows and then the model "disappears" if you are actually focused on what you are doing. Sometimes I did a drawing of nothing but the shadows. 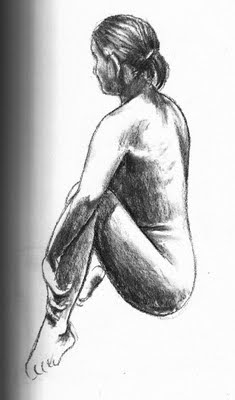 And since drawing people was the "last frontier" for me when I started drawing oh so many years ago (hey, it's my birthday tomorrow!), it's good to keep in practice, especially to remember that not all bodies look the same. I already feel that the faces that I draw are too similar.
Posted by Matt Towler at 9:49 PM No comments: