:forward into the past 7: 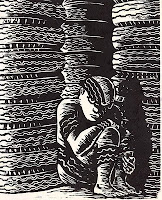 This was a linoleum block print that I worked a LONG time on. I can't imagine how people who did woodcuts back in the past managed to keep good use of their hands.
Posted by Matt Towler at 9:05 PM No comments:

Email ThisBlogThis!Share to TwitterShare to FacebookShare to Pinterest
Labels: art past

:forward into the past 6: 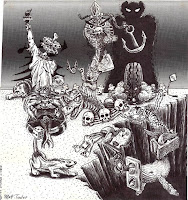 From 1986 - 1996 I did something I called "visual cacophony," in which I kept a month-long list of the first image or word in my head when I woke up, then I would try to create a single picture from it, and try to use a different medium each year. I stopped doing it partially because I was running out of new mediums to try, and partially because I was taking longer to finish them: 1995 & 1996 were completed in 1998.

Email ThisBlogThis!Share to TwitterShare to FacebookShare to Pinterest
Labels: art past cacophony

:forward into the past 5:

A drawing that caused some concern for my mother, since the tombstone being broken in question was a cross. She wondered if this reflected my views on religion. Not at the time, no. I just thought it looked cool. Although all I can see now is a terrible grasp of basic anatomy.
Posted by Matt Towler at 8:29 PM No comments: