I won't be around tomorrow night for my usual Wednesday night posting, so here I am now. Finished this last week, delivered it to the Fools Mansion, the opening party will be this Saturday night if you find yourself in Salem and not in a shotgun shack.

I'm too wiped out from either my headaches or the medicine I'm taking for them to write much else. Here's hoping the TMJ people find what's up with me and FIX it. 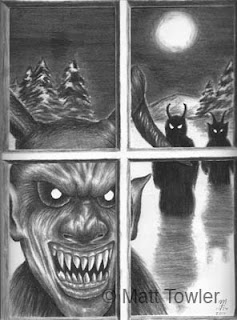 Email ThisBlogThis!Share to TwitterShare to FacebookShare to Pinterest
Labels: Krampus 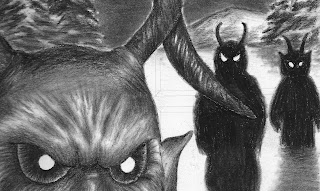 The Krampus piece should be done and ready for delivery to the show by this weekend. Once again I won't show you the whole thing until the show starts, nyahh. I may associate this one with pain, as I've been plagued with headaches the past few weeks and had to skip a few nights from working on this. I think it has to do with my jaw, I will be going to somebody about it soon. I've been clenching and grinding my teeth in my sleep for who knows how long, I've lost two teeth as a result of it, and the newest mouthguard I got made things worse. It's like my body is trying to sabotage me in my sleep. But enough about that.

I did this piece in charcoal, something I haven't used in awhile, and like pencils, it came back to me nearly instantly. It's like painting to me, of which I am not very good at, at least not with oils.

The whole Krampus thing gets more and more fascinating to me. I found a book about it, but it arrived long after I had already begun the artwork. Krampus cards were a big deal in Europe before WW I. Most of the art depicts naughty children being carted off or flogged by St. Nicholas' helper, but sometimes it's adults, and the women don't seem too displeased by his appearance. Inneresting.

The spaniels are still showing up in my sketchbooks. The theme seems to be, "what awful things can I do to them next?" Awful things that I can't show you right now, that's what.
Posted by Matt Towler at 9:32 PM No comments:

Working on my piece for the Krampus show. I'd have gotten more done if not for time and raging headaches and neck aches. One reason for a new apartment will hopefully be a better creative space. This one is just not cutting it. Nor is my bed, another reason for those aches. Sigh.

Working in charcoal this time. I usually used it for figure drawing, I've forgotten how easily it flows. I should be able to finish this in time for the show. 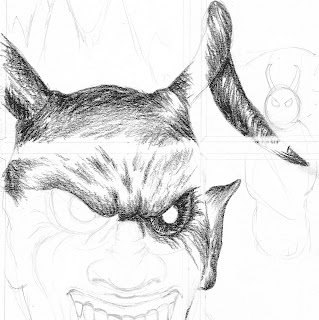 It's time once again for the Krampus show in Salem, and I'm trying to come up with something for it. The piece I made last year actually sold, so there's some pressure in my head to outdo it. Right now I'm not sure if I'm going for horrific realism or somewhat whimsical. I've seen my share of both in my research. It's a pretty big deal in some parts of Europe. With a little push we can bring Krampus to these shores, why not. 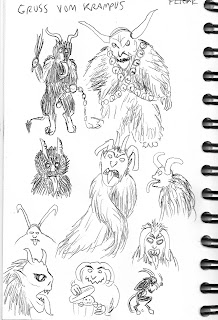 So of course this past weekend was Halloween (well, Monday, but even though I partied then, most choose the weekend), and I was more focused on that than other things., even with a freakish amount of snow on Saturday. I wore Day of the Dead makeup and made an outfit as best I could from what I have. Tried to find a mariachi outfit but all I could find was a rental and I'm not paying that much just for a day or two.

As far as I know there's no Mexican blood in my family, but I'm fascinated by the celebration of Dia De Los Muertos, quite the opposite of how death is viewed up here in America. I even went to Mexico City one year in the hopes of witnessing such, but truthfully saw very little. Either I was looking in the wrong places or it isn't a "big city" thing down there. Maybe again some day. I still enjoyed myself. I really should be traveling the globe, but, no money, so what's new. Somebody pay my way and I'll take so many photos to make up for it!

I've wanted to make some elaborate costume for years, like an alien or giant insect, but it's never come to fruition. Plus it'd have to be something I can stand to be in for an extended time. Even a simple mask is too much after awhile for me.

So begins November, one of my least favorite months; the comedown after Halloween, getting darker and colder, Thanksgiving - which only means time off from work for me, and the intrusion of all things Xmess. Yayyyy. Thank goodness for Krampus. Well, maybe goodness has very little to do with that.
Posted by Matt Towler at 10:46 PM No comments: