I finished this last week! It will be on display and for sale in the the show "From Beyond," an art show inspired by the works of HP Lovecraft, at Fool's Mansion, 127 Essex St, Salem MA 01970. The opening is this Saturday night at 8 PM, and trust me when I say that their art openings are like no other that I've attended. 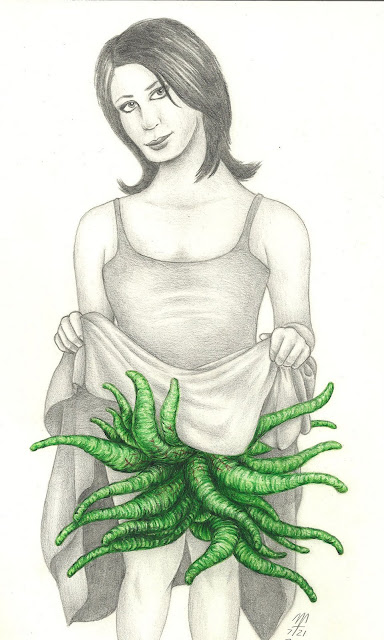 I pretty much stuck to the final sketch. I tried drawing large tentacled beasties, but none of it was working for me, so I tried for the terror within. 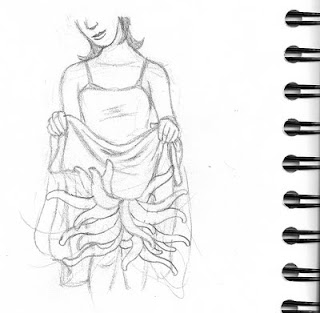 The original plan was to create it with Corel Painter, but it was acting dodgy. A victim of my finally upgrading to OS X Snow Leopard? I won't be upgrading to Lion anytime soon. To their credit, Corel customer support quickly supplied fixes, but I had wasted enough time as it is, so I went back to pencils. 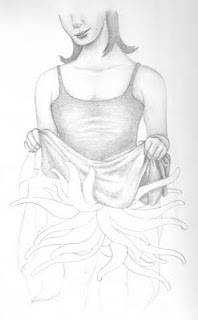 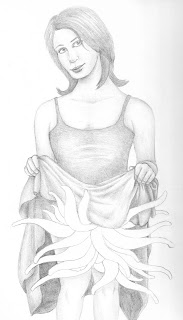 I had meant to leave the top part of her face out, as I think the focal point of this piece is pretty obvious, but after I bought a frame, I found a lot of leftover space, so I added the rest of her face. There's at least three references I used for that, but mostly from my puny mind. 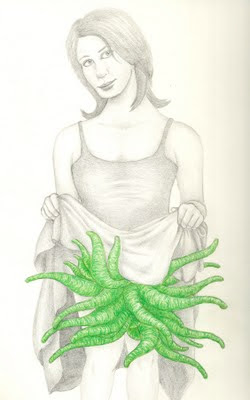 Then I got to work on the tentacles, which was really fun for some reason, probably because they weren't based too much on reality and so I couldn't screw them up too much. After they were done, I had to go over the rest with darker pencils so that the tentacles didn't stand out THAT much.
I'm really happy with how this turned out. I wish I had more hours in the day for this. Oh for a pile of money or a rent-free living situation.
Posted by Matt Towler at 10:22 PM No comments:

I'm almost done with this piece, some more shading, then I'll sleep on it (not literally) and see if I need to do anything more to it tomorrow night. If not, then I'll pack it into the frame and it's off to Salem on Saturday.
I've really enjoyed drawing these tentacles the past two nights, they just flowed out of me, so to speak. I find it somewhat easier to draw things that are not based in reality, you don't have to worry so much about whether or not they look "right," unlike, say, a person's eyes. 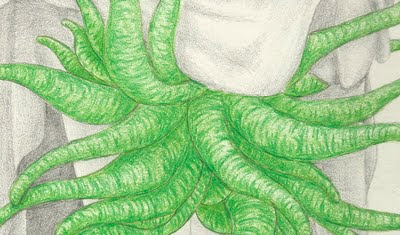 I'll publish the final piece next week, along with the steps I took to make it.
Posted by Matt Towler at 10:28 PM No comments:

I have had very little free time this week to work on this piece, I will probably be finishing it right up until the deadline. Insert lament about work vs. my time here. I'd like to show more, but truthfully I don't want to until it's finished and hanging up on the gallery wall. 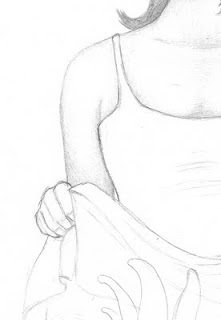 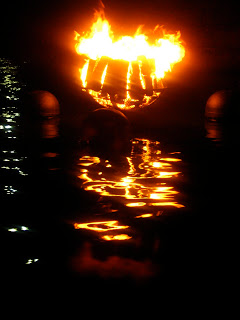 After that winter, I dare not complain about the heat, but woo it's a scorcher tonight. Even with the AC and a fan on I don't feel like moving around too much, and thus, not getting much done tonight. The general idea for the art show piece is there; I just need to finalize it, maybe need some photo reference for aspects of it. Next week will be busy time for sure.

For some reason I keep going back and reading and looking at the spaniel stories I talked about here. I can't  really say why, as they are so crude in idea and visuals. I guess I'm trying to figure how my mind came up with such things, especially at such a young age. Maybe I was striking out at my "enemies" or frustrations through cartoon violence. There were some sexual aspects to some of the stories too, which is amusing to me now as I certainly didn't have any experiences of the sort at the time. Late bloomer to say the least. I don't know, maybe since my life is so frustrating right now, maybe I'm trying to relearn how I dealt with and maybe it'll show itself in creative ways. There are times when you don't want to be an adult anymore, though.
Posted by Matt Towler at 10:10 PM No comments: