This past weekend was the Boston Comic Con, I don't normally frequent such events but a friend got me a ticket, so there you go. I was mainly going to see some of the artists that would be appearing and signing there, including several that influenced me and my art.

One is Michael Golden, who is still active, but I knew him first through the "Micronauts" comic, based on the toys of the same name (yes I had them too), but better written than something you'd think was made just to sell more toys. And the artwork too, which is my point. A lot of my own artwork of the time shamelessly copied his, but I was a young teen, so I'm allowed. Right? I told him at the Con that things like his drawings of explosions and pools of blood caught my eye. Well, whatever works! 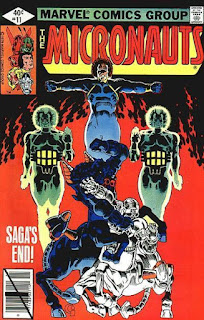 Bill Sienkiewicz was there as well, I cannot express how much his artwork blew me away back then, until Dave McKean came along and then my brain exploded. Metaphorically, that is. He started out doing comics in the traditional way but evolved more and more until it was more like illustration. It must've been hell for deadlines and printing, but worth it in the end I'd say. See "Elektra: Assassin" and "Stray Toasters" and tell me I'm wrong. 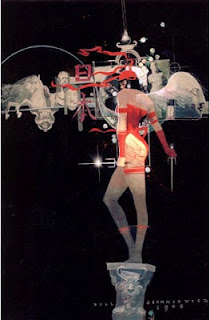 Other than that and a few other artists, I didn't find much else for me at the Con, it wasn't a huge space like I'm sure the legendary one in San Diego is, and I truthfully don't buy many comics these days, maybe collections from time to time, and I'm trying to find new manga series to follow. I never was big on superheroes, it was always sci-fi or fantasy oriented, it seemed. although Batman got in there a few times.

Like is standard at most cons these days, there was a fair share of costumed folk there. Your expected Batmen, Jokers and now Harley Quinns. Catwomen of varying success. Several Tony Starks. Not Iron Man, Tony Stark. You need the right facial hair to pull that one off. And of course the 501st Legion was there. But sometimes the simplest costumes are the most successful. 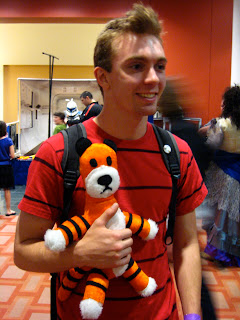 Posted by Matt Towler at 9:31 PM No comments:

Email ThisBlogThis!Share to TwitterShare to FacebookShare to Pinterest
Labels: inspiration

I hunkered down and worked on the new sponge logo, I think I've finished it. I was torn between the two versions below, I was kind of shooting for an official-looking sort of seal, but asking around for outside opinions confirmed my instinct that the wreath was a bit too much. Sometimes when I get too many ideas I try to fit in all of them. 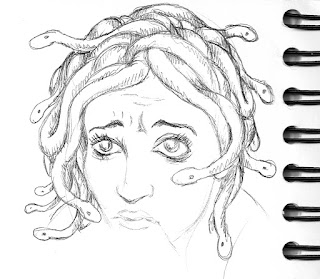 I also did further work towards the Medusa piece. I'm hinging a lot on her facial expression, so, I'm getting closer to that.

Also! This past week I FINALLY got a DSLR digital camera (Canon Rebel XTi), so once I learn all the buttons and knobs I'll be shooting with more control over the images, moreso than with a point-n-shoot anyways. I'm still going to use that - lugging around this larger camera is not always convenient, and of course now I'm afraid of it being stolen. But the possibilities abound. I took a few pics this past Monday, up on my flickr page, but nothing spectacular, just used the automatic modes for those until I learn more.
Posted by Matt Towler at 10:39 PM No comments:

Wish I had done more this week, but some mental issues got in the way for a bit. I say it too much, but atmosphere is all, and I need a better place to create in. Still looking. Trying not to despair.

That said, I did a bit more towards the Medusa drawing I started last week. The internet is actual good for something, as I use it a lot now to look for references. I used to feel bad or guilty about it, but I've seen writings by artists I admire who do this same thing so I don't feel bad anymore. I like to get as much as possible from my own mind and vision, but I also want to make sure I get the facial expression I'm looking for, and also to make sure the snakes look right and not like a pile of spaghetti on her head. 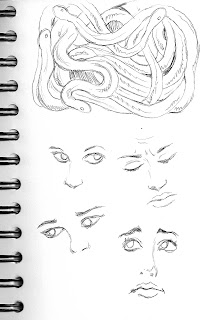 For some reason I've had Medusa on the mind, and have been toying with artwork of her. Depending on which account you read, she was either born that way as one of the three Gorgons, or she was turned that way by a jealous Athena (which makes one wonder, why were the Greek gods so insecure? Always turning humans into something else on a whim and then there's Zeus, horndogging it after almost anything in a short toga).

So I had it in my mind, what would her reaction be when the change happened? Quite a bit of shock, I'd say. This is only a rough idea of that. Let's see where this goes. 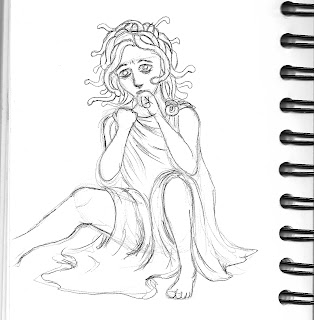