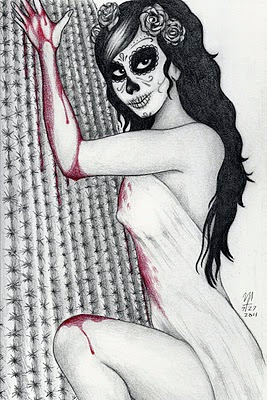 ...and here she is. If it confuses you, it's inspired by the Pixies' song "Cactus:"

It's an idea I've had kicking around for some time, I finally did it for an upcoming Halloween show (I consider Dia de Los Muertos as part of Halloween :-P )


I seem to be sticking to using just pencils lately. No real reason why. Avoiding learning the drawing tablet, perhaps? Or seeing if I can still draw without digital trickery? I can tell you this much, I'd have preferred scanning in a cactus than drawing every last spine like I did.

I completely changed direction from last week. This is an idea I've had on a list (one of many lists), but I think it'll apply to Halloween. Or Dia de Los Muertos, at least. I'm glad I got this much done tonight, as for some reason this week I've been feeling more anxiety while at the apartment than usual. I may need to seek medical help finally. But I've found it helped to just get started and keep my head down. It's just that it's difficult (for me) to stay in the zone when somebody in the building goes BANG BANG THUMP THUMP or does something that makes the whole building shake. Guess I'm "weird" in that this bothers me. :-P 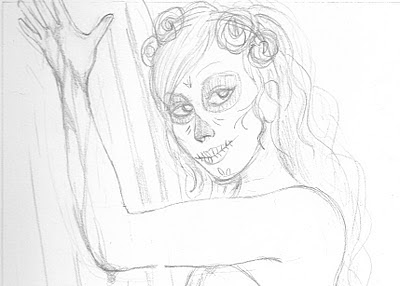 There's a Halloween art show coming up that I'd like to make something new for. Not entirely sure what yet. I could either go the full horror route or go whimsical. 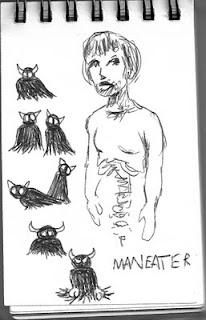 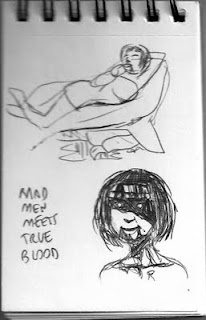 I can't speak for other artists, but often in my case artwork is never really finished, it's just done "enough," or in danger of too much re-working. I can recall a comic I did called "Bleed for Me" that I re-did several times. Still not sure if the end result was the best. But it's either redo it again or go on to other things from there.

Case in point, I find myself still thinking about or re-reading those awful dog stories I went over in a previous entry. Partially because it's like a different person did them and I am trying to recall the state of mind I was in when I did them...besides being young and confused (as opposed to older and confused like I am now). Also looking at the art and writing and wondering if it were done better, could it work now? Even though at the very core it's about dogs being killed in many ways. Alien dogs, okay, but dogs drawn in an intentionally cartoony way.

One thing on my eternal list is a manga-style series, I just need a story, perhaps this could be it. I've seen some good horror manga and also some surreal humor ones (I LOVE FLCL!). Could be, could be...

Anyways the spaniels keep finding their way into my sketchbooks lately. One of their aspects is that they breed like rabbits, so I offer both apologies and none for the following: 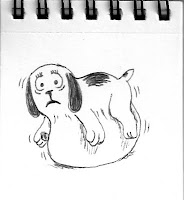 Posted by Matt Towler at 9:59 PM No comments: