I'm proud of the fact that I've been able to write regularly in this blog (once per week for those who don't look at the dates). In truth that discipline has kept me creative so that I actually have something to write about from week to week.

I took a break from writing here last year, partially because I had the regular notion that I'm the sole reader anyway, but also with the intention of completing certain projects, namely the redesign of my website, which is pretty much essential to have as an artist these days. I didn't complete that plan. When I hand out my business card it's with some embarrassment that I have to explain that my site is not quite what it should be.

I took part in an online seminar this past Monday (during work hours so I was multi-tasking as usual) that was mainly about staying focused and getting past such obstacles and just Getting Things Done. One thing that stood out was the need to do one thing at a time. This year I have been doing many projects at once, alternating doing small parts of each one. I think it went well for some time, but to go from photowork to pencils to working on a doll, I think abruptly altered some of the focus for each project. So far the doll is still uncompleted. I guess I'm "lucky" that the gallery that showed some interest in them last JUNE still hasn't gotten back to me about them.

So there was that lesson and the fact I already know, that the website needs to take priority. Which is what I intend to do going forward. That process doesn't make for interesting reading, I don't think, plus this is partially a visual blog, so there's that too. Thus it appears that I'll be on "hiatus" again, unless something catches my (camera) eye that I must share.

Like last Friday, which was my birthday, when I spent a good part of it at Boston's Isabella Stewart Gardner Museum (free admission on one's birthday, FYI). It was a cold and rainy day, but the central courtyard let in enough light to still make it a wonder to behold. 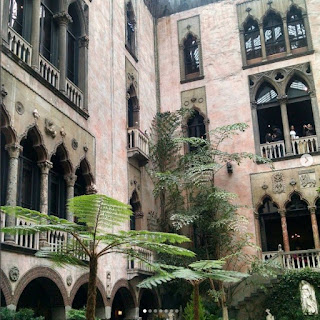